Why Red Meat Is a Health Food? 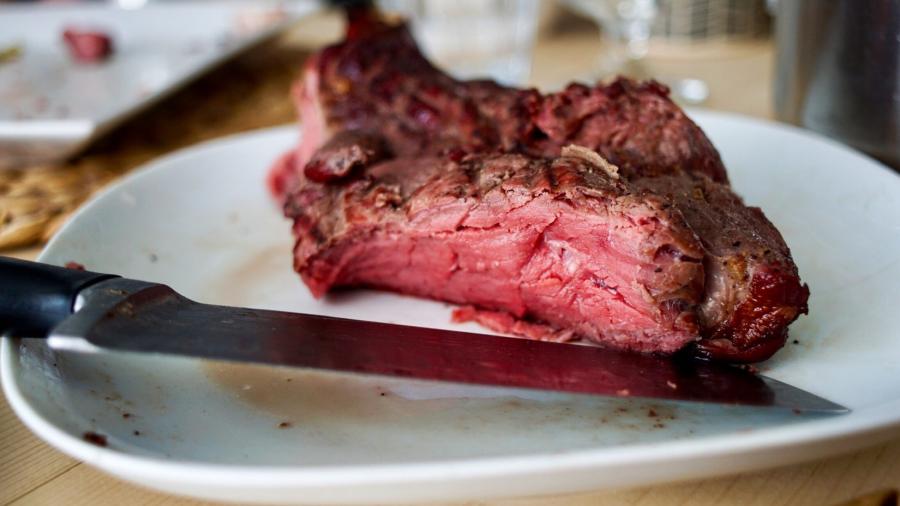 Red meat is one of the most feared foods in the world today. Some would say it’s even more feared than (gasp) gluten.

But in my opinion, red meat is actually one of the healthiest foods you can eat.

No wonder why metabolic health is so poor today.

For instance, most people would say a vegetable is healthy because it’s not red meat.

They’ve heard it parroted that red meat causes disease, but they don’t really know why or understand the mechanism.

This is the power of the media.

I would define healthy based on the inflammatory components and nutrient density.

What does healthy and unhealthy even mean? Below is my rendition:

We eat for two main reasons:

Humans are heterotrophs. Our bodies cannot manufacture everything we require to function. We must get certain nutrients from food.

There are three macronutrients: protein, carbohydrates, and fat. We need these to function properly.

There are four classes of micronutrients that are essential.

Then there are more subjective nutrients determinations. Areas where we have reason to believe that more than what the government recommends would be beneficial for health. These include conditionally essential bioactives like taurine, carnosine and creatine.

There are also more subjective determinations such as cholesterol being good or bad, saturated fat being good / bad, etc.

And lastly, there is bio individuality in each individual and certain components of foods which can trigger an individual’s immune system. I call these inflammatory components.

This is all to say that determining what is healthy or not is a lot more complicated than most people believe. A healthy food is not merely “something that’s not red meat or not fried”. It needs to take into account all of these factors.

If you were to rank the three factors above, I’d have to put essential nutrients first. These are essential. That isn’t an exaggeration or the millennial filler word. Without these you cannot survive. Almost like avoiding oxygen, you will suffer without these.

First, from the nutrient perspective, red meat is one of the most nutrient dense foods in the world.

Nutrients aren’t just those things on the back of your food label. They’re fuel for mitochondria. When you don’t get sufficient amounts of protein, vitamins and nutrients, your body slowly sputters to a halt.

Deficiency in nutrients — many found predominantly in animal foods — can lead to major health issues.

Red meat is loaded with almost every single essential nutrient. If you consume an entire animal, nose to tail, you can meet the requirement for every single nutrient. This cannot be said about a plant based diet.

The challenge for plant based advocates is that many of these essential nutrients are not prevalent in adequate amounts in plants. Call these zoonotic nutrients: nutrients only available in sufficient amounts in animal products. Nutrients such as B12, vitamin A retinol, Vitamin k2 and DHA.

Then there are bioactive, conditionally essential nutrients that are predominantly found in red meat like creatine, taurine, carnosine and carnitine [*]

This study found that people with chronic fatigue have low levels of carnitine . The best source of carnitine? Red meat.

But how do vegetables really stack up? Biochemically, animal products are the only sources where we can get all our macro and micronutrient needs.

Vitamins A, B12, D and K2 — nutrients that we cannot function without — are not prevalent at all in plant foods. 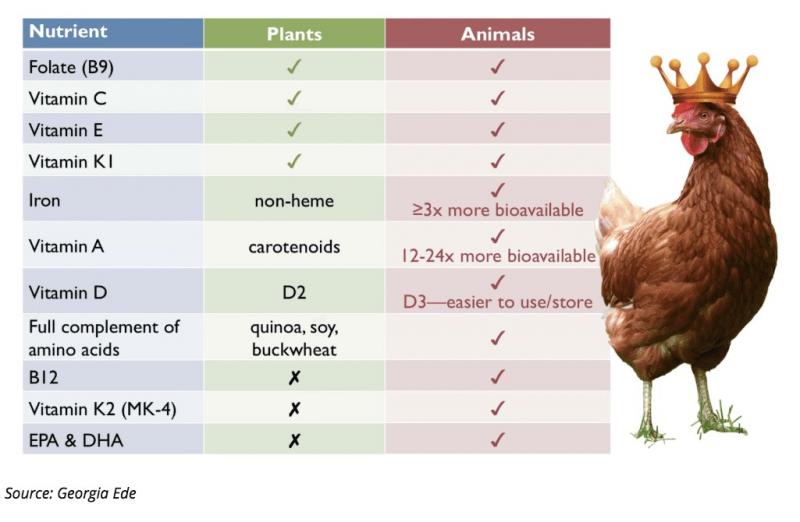 While a separate issue, this is also a huge contributing factor to the mental health crisis today. Many of these vitamins — DHA, B12, Iron & selenium, for instance — are critical for brain health. If you deprive your brain of animal products, it will lash out.

Humans are able to survive off of animal products alone. The same cannot be said about plants or carbohydrates.

What about the so called dangers of red meat?

Sure, maybe meat is loaded with nutrients -- but what if it’s killing you? Like a multivitamin laced with chloroform.

Well, in my opinion, the vilification of meat is the biggest health disaster of the last century.

And at this point there is NO evidence to support it.

When it comes to meat, most people are afraid of both cholesterol & saturated fat. But over the last decade there have been a number of studies debunking these common fears. Let me show you

This 2015 meta analysis concludes… “Saturated fats are not associated with all cause mortality, CVD, CHD, ischemic stroke, or type 2 diabetes” 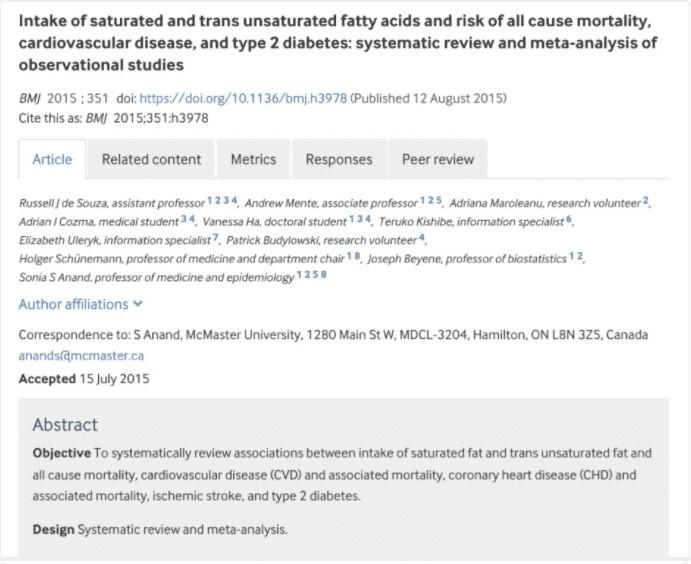 Other interventional trials lowered cholesterol by reducing saturated fat and did not obtain the outcome they desired. For instance, in the minnesota coronary experiment rsearchers lowered cholesterol like they intended by 14%, but this led to a “22% higher risk of death for each 30 mg/dL reduction in serum cholesterol”. This study was BURIED for 40 years.

Lastly in the RCT Sydney heart health study which was meant to support the AHA’s hypothesis, 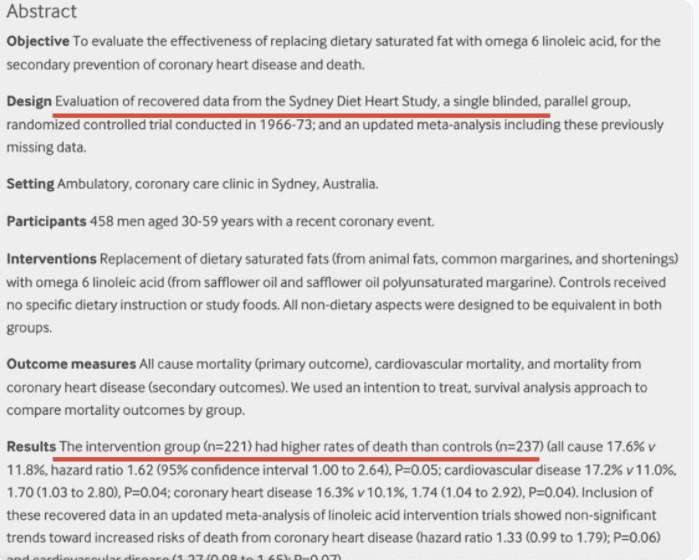 When it comes to cholesterol, the studies have been just as disastrous.

In fact, just recently 19 BMJ researchers called for us to retract guidance on reducing saturated fat as evidence no longer supports it.

This was largely based off a 2019 meta analysis of 22 studies that concluded:

Coupled with the studies above, and i believe there’s no longer any evidence to fear red meat.

The last point I’ll touch on is inflammatory components. This is much more controversial and speculative, but I believe that for many people plants are increasing their inflammation and leading to sickness.

Plants do not want to be eaten. And like kevin mccallister in home alone, they’ve set up chemical booby traps to defend themselves.

vegetables are actually harmful to many people.

In fact, there are 8 ubiquitous vegetables that destroy you from the inside.

Amber O’hearn was looking for evidence to support the necessity of vegetables in our diet, and stumbled upon evidence that proved the opposite.

A randomized controlled study looked to determine the effects of green tea extract on smokers. To remove other confounders, they decided to remove vegetables from the diets.

They actually found that removing vegetables from the subjects’ diets reduced oxidative damage. Vegetables were harming the participants.

A 1990 study identified 27 rodent carcinogens in plants that are produced for self defense.

About half of the tested chemicals were rodent carcinogens, and are found in many common foods.

Our beloved vegetables — the foods that we hated so much as a child, but our parents forced us to eat because they were “healthy” — are actually TOXIC.

Almost every vegetable has a toxin in it that can be irritating. The table below summarizes some of the toxins that you can find in plants. 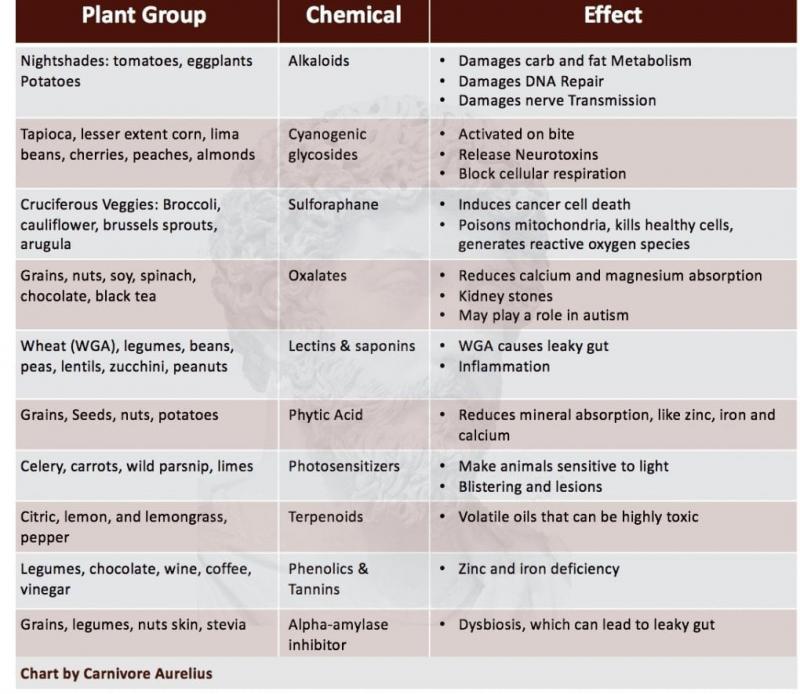 Cruciferous vegetables such as broccoli, brussell sprouts and cauliflower produce sulforaphane when cut or chewed . As mentioned above, Sulforaphane is touted for its antioxidant benefits.

And there is some evidence that it can kill cancer cells. But the problem is that it doesn’t discriminate between healthy and cancerous cells, just like chemotherapy.  At a high enough concentration, Sulforaphane can be damaging to health and even cause cancer . Sulforaphane also competes for Iodine and can cause hypothyroidism .

Nightshades have alkaloids which damage fat and carbohydrate metabolism and DNA function. Limes, carrots and celery have photosensitizers which can irritate animals when they go in the sun. Resveratrol has been shown to inhibit androgen precursors . And polyphenols can cause DNA damage

There are also a number of what are referred to as anti-nutrients in vegetables.

Phytates, in both beans and tortillas, inhibit zinc absorption and decrease nutrients’ bioavailability. If you consumed zinc with black beans, you will absorb only about half the zinc. This is part of the reason why the RDAs are wrong.  Spinach has oxalates, which bind to calcium and magnesium and reduce absorption.

If you’re looking to improve your health, it’s time to center your diet around red meat.

Red meat is the healthiest food in the world, loaded with nutrients and safe for your immune system.